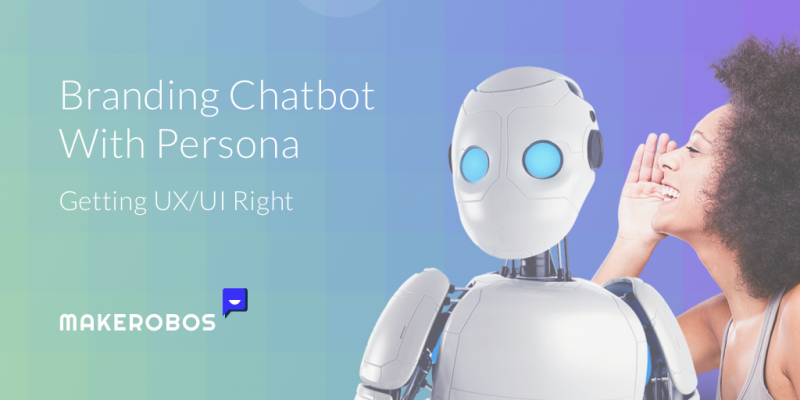 Chatbots have increasingly becoming the part of many businesses. So, simply having a chatbot is no longer enough to set yourself apart from the competition. But the way your chatbot works can make a world of difference. We will find out why chatbot personality matters and how you can infuse life into your chatbot that perfectly fits your target audience.

Recalling a little bit of history will give you an idea that humans have long imagined about bringing their loveable characters to life. And now when intelligent chatbots have become real in our lives, it is imperative to know that personality more than technology is the way to humanize your chatbots and gives some distinctive identity of its own.

It was all started with Eliza in 1968 which was a virtual psychotherapist created by German-American professor. Though Eliza was not hardcoded, it was just a simple program and the objective was to help the people to unload their burdens by chatting with it. It was found that that though the conversation was non-directional and delusional, the impact was deep and people found it thrilling.

Two years later, the concept of artificial intelligence was introduced in which a robot HAL followed unintentional consequences of its programming. The concept was not much changed since Eliza but it was well received and instantly became an icon of pop culture. Later in 1990, Stanford professors started studying the reactions of humans to computers and it was proved that people were treating the computers more than just the inanimate group of codes.

Later with the advent of instant messaging apps, businesses started searching for ways to take advantage of this technology and SmarterChild was born. It was basically a computer program answering queries on sports, stock exchange and news. People, especially children hurled abuses at it as part of the fun after-school activity. The original creators didn’t expect the kind of response it would get from the public. So, instead of doing any modification they continued with the program and gave a, irritable and sarcastic personality to it. This resulted in the favour of the company as SmarterChild spread like a wildfire, representing about 5 percent of the global instant messaging traffic. So, in the end it was remembered for its e and distinctive personality.

In 2011 when Apple rolled out its Siri, it was a huge step forward in the field of artificial intelligence. People entertained themselves by posing silly questions to it and in return, get sarcastic responses.

Practical lesson from history — Why I am talking about this?

Designing a character for your chatbot is important. People generally think that no one cares about the user experience of their product, in case chatbots. Because they are just computer program, a robot, meant for answering quick questions, right? It is not necessary or superfluous to give them a personality of their own. But it is totally wrong. Why? Because, the end user is a human. And agree with me or not, humans are critical with different motivations. They continuously look for emotional bond everywhere.

So, it is very important to give the first impression, a long lasting one. The look and feel of the chatbot is equally important as of functionality. And it can only be achieved by giving unique personality to your chatbot. After all, a chatbot is a robot, but it doesn’t need to sound like one. The reason why I am mumbling so much about this is the frontman, the chatbot making platform through which I created a chatbot and integrated on a website. Here what I did with it.

Humans remember and recall emotions, and this is the reason why a fun chatbot personality and take this experience to a whole new level. By giving a unique personality, creating human connection with the customer is easier. I incorporated natural-sounding language such as ‘Hey! Replacing ‘hello, how can I help you’ and simply used appropriate GIF responses, emoticons or memes instead of scripted text.

With frontman, it can even possible to train it to respond to certain joke formats such as ‘Who is there’ when a user types ‘knock knock’. All these ingredients can really bring value to the business or brand.

Blending with the brand

Ultimately, personality of a chatbot should be one that is tailored to your brand. I gave a user friendly avatar to the chatbot which blended well with the company which I was assigned to integrate the chatbot with. Also, giving a catchy name to the chatbot can add a bit of friendliness and playfulness to the discussion. Moreover, I added a ripple effect to add a touch of excitement to the conversation.

All of these are important as to avoid boring and irritating conversation with someone without a face. Further, a brand logo on the top of the frontman widget along with links, buttons and dialogue bubbles added more emphasis to the user interaction.

And finally, I added a quote that explains the reason for its existence and what it does for the brand. For example, a travel chatbot might open up like

‘Hi, welcome to travel.com. I am here to assist you with any query regarding flight and hotel bookings.”

This clears the intentions right off the bat without distracting the user from actual purpose.

The best chatbot personality comes by blending functionality and fun. We have to strike a balance that fits the brand personality as the brand is the symbol that your visitors trust. Though I added a lot of fun factor, I made the user interface simple as simplicity can make the user experience better and clear.

A satisfying UX design has the power of resonating at a personal level. And this was achieved through persistent menu or navigational menu where I placed the most relevant of services of the brand website.

The right tone of the chatbot is very important in creating a unique personality. Just imagine what the tone of your brand’s voice is. Is it witty, cheeky, or educational? This will determine how the conversation between the brand and the visitor might look.

For instance, if your business involves payment confirmation for a secure transaction, it will definitely need a tone of trust and seriousness. In my case, the business involved bookings for hotel room, so I had more space for fun. Similarly, a jokey banking chatbot might not get the same level of acceptance as it would get from a food delivery business.

We must also be meaningful and deliberate with the choice of words. For example,

‘Oh, we can fix it’ is much different from ‘Hmmm….contact customer support for resolving this issue’.

The technology of chatbots is undoubtedly making exciting advancement but chatbot personality is the extra little best practice that can turn a neutral, functional user experience into a wonderful and memorable conversation. Chatbot personality that blends well your brand can make a lot of difference in churning more users and building trust.

Frontman is a great bet by Makerobos in the creation of chatbots with superb technology with a lot of personality.